Supporters of the proposed North Skye ‘organic’ fish farms might wish to consider the implications of numerous trucks leaving the Highlands & Islands from all directions, each carrying several stinking tonnes of dead salmon:
1. Implications for the existing aquaculture industry, unable to an increasing diversity of vile fish diseases and that eternal scourge, sea lice.
2. Implications for new ‘organic’ salmon farms that may not use the chemical treatments that the big boys use against pests and diseases, albeit with limited success.

Several of us have seen these transports in Wester Ross, Skye, Lochalsh, Lochaber and Lorne, and others have been noted preparing to leave the Outer Hebrides. They are symptomatic of massive mortalities on fish farms the exact causes of which we have yet to find out.

It all began when a friend rang to ask me to join him a.s.a.p. with my camera. He'd seen (and smelled!) two containers that were waiting to be picked up from Kyle of Lochalsh, ironically parked in front of the local seafood shack. We couldn't see their contents, but the stench was characteristic and horrible. A driver confirmed that they contained dead fish from a farm in Loch Kishorn, owned by Scottish Sea Farms. They declined the opportunity to comment offered by the West Highland Free Press who reported our story.

Next, more tucks were seen heading through Fort William and then another observer reported a similar scene in the Torridon region, all heading south, probably to a rendering plant in Dumfries.

I myself had three more encounters in one day:

“At 11.30 a.m. on my way home from Oban this morning (2 Nov. 2017), I passed a Billy Bowie container lorry heading towards Ft William (ultimately to Dumfries, we understand) on the A82 about 5 miles north of Spean Bridge. The stench was unmistakable and appalling and it took about 3 mins to pass the lorry’s wake and refresh the car’s atmosphere. Then later, as I passed a truck on the road above Invergarry, which I didn’t specifically identify, again the stench of rotting fish filled the car. Next, I passed two trucks carrying familiar yellow containers, presumably empty (no noticeable smell this time), just out of Reraig en route in the Kyle direction.”

Just last Wednesday (13th Dec.), as I drove between Kyleakin and Broadford on Skye, the car filled once again with that awful pong. All windows open and wait for fresh air. I didn't see the truck, but there can have been little doubt one had just passed, heading south.

Perhaps the best evidence came from the Isle 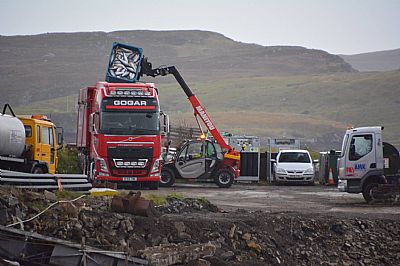 of Lewis, just a photograph but it shows precisely what those trucks are for. ►

All this got picked up and investigated by Joe Crowley for BBC's The One Show, shown 11th and 12th December 2017.

Joe Crowley: "In fact figures show that an average of one in four salmon are dying and it's getting worse. Last year nearly twenty-two and a half thousand tonnes of salmon died on Scottish farms, double what it was just three years earlier. Some were affected by sea lice that feed on the salmon, weakening or killing them."

If salmon farms, of several companies at many locations, are shipping out tonnes of dead salmon, it suggests all is not well down on the conventional fish farm. These operators are able to throw £millions at their problems and they still have massive mortalities and these operators are using chemical treatments forbidden by the Soil Association (SA) to organic salmon farmers.

Notably, before even obtaining planning permission, Organic Sea Harvest (OSH) has already prepared to ditch organic status if their farms become infested or infected so that they have to use SA-forbidden chemical therapeutants to which fish farm pests and diseases are rapidly becoming immune:

“It is recognised that if the farm breaches the Organic Standard there may be the need to farm under conventional farming methods.” – OSH Environment Statement 17/04749/FUL

Invasion by sea lice is pretty well inevitable, so this expedient is likely to be implemented and maybe not long after the 'organic' farms have been installed.

North Skye residents supporting these planning applications (Culcacnoc & Scorrybreck plus two more proposed by OSH) because of the promise of organic might wish to reconsider their opinion. Anyone who does change their mind, please tell the Highland Council by 22 December (HOW?).