FISH FARMS (a review of net-cage salmon farming in Scotland) 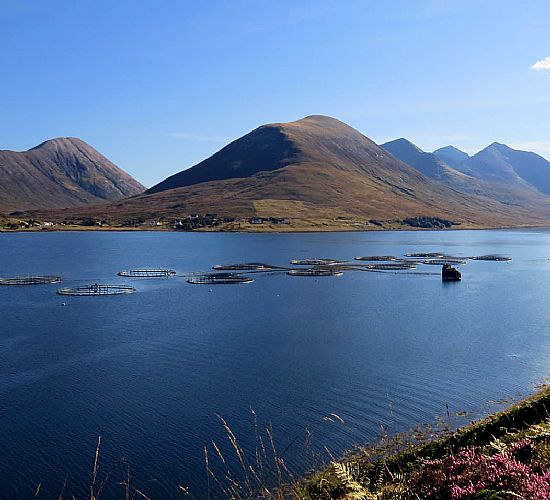 When we tell people what we've learnt about fish farms they are shocked and invariably remark, "Really? I had absolutely no idea!"

When I first started to investigate salmon farming in Scotland (and Canada, Norway, Chile etc.) I too had no idea, although in a detached, vacuous way I just assumed I did sort-of understand the subject. I was wrong; foolishly, utterly wrong. I was ignorant and needed to get learning, which I did. It wasn't long before I stopped eating farmed salmon and started campaigning.

Sottish salmon farming has many disadvantages of which most people are unaware, and one especially important one: HOLES (see below). Like us, when we discovered the facts about open net-cage fish farm pens, other people soon change their minds about farmed salmon. Meanwhile, aquaculture spokespersons relentlessly, shamelessly defend their industry with an air of authority and expertise as they explain to the public the opposite of what, after a little investigation, we know to be the case.

In fact, those people we spoke to (and I, at the time) had no idea that a major industry – salmon fish farming – is allowed to dispose of all of its raw sewage, directly into the sea, in spite of predictable harm to the marine environment and at no cost whatsoever to the polluter. IS THAT TRUE? If you watch only one YouTube video about salmon farming, please make it THIS ONE from Living Oceans (Canada). The commentary includes this brief but poignant passage, which pretty well says it all:

“One reason net-cage industrial farming is profitable is due to externalised costs. At present the salmon farming industry pays nothing for waste disposal. Fish faeces and uneaten feed pellets go directly into the ocean. Our environment and wild marine species pay the price that secures the industry’s profits.”

Here's another telling passage, paraphrased by Charles Clover from an excellent WWF publication:

“This year [2000], salmon farms will produce 7,500 tons of nitrogen, equivalent to the annual sewage from 3.2 million people, and 1,240 tons of phosphorus, comparable to sewage from 9.4 million people. The ecological result is effectively greater than the sewage produced by Scotland’s 5.1 million humans.” – Dr Malcolm MacGarvin

I invite you think of it THIS WAY.

The Living Oceans video is also an excellent introduction to the solution to our fish farm problem: closed containment. You see, the big (biggest) problem is in the design of the pens where the salmon are kept, which are made of netting and are, therefore, absolutely full of ...

... that let out all the fish shit (sorry, but it's the best word for the purpose) that then pollutes the sea in both obvious (murky water) and very subtle ways (nutrient overload). As well as that, sea lice, which breed joyfully on captive salmon till they become vastly numerous, escape through the holes to infest wild fishes to their fatal detriment (see Krkošek et al., 2012).

If the industry were to do away with those poo-leaky holes all the problems with fish farming (as currently conducted) would evaporate. Compare open net-cage fish farming with closed containment HERE (and, if you don't believe me, HERE). Of course, although a complete changeover to safe aquaculture would be eminently sensible, it would cost some businessmen a lot of money. So?

Who should be paying to farm salmon safely?

► Their customers who want to eat cheap & healthy fish?

What the people we spoke to did know - though not necessarily correctly - was that - they thought - farming salmon is good because it produces nutritious food that we can enjoy cheaply and it will also help to feed the starving, provides much needed jobs in regions where employment is much needed and brings prosperity into hard pressed rural communities. These advantages - which might not be as advantageous as PR might make them seem - are given a lot of hype while the disadvantages - which I suggest might trump the advantages - receive precious little honest exposure. The fish farmers' publicity keeps telling us all about the alleged benefits, over and again, until most people believe that's all the truth there is. There's a lot more to it than that; a lot more. If you want to find out about the pros and cons of salmon farming in Scotland, you can surf the internet or read HOLES: Scotland's Salmon Sewage Scandal from Blue-Skye Books. 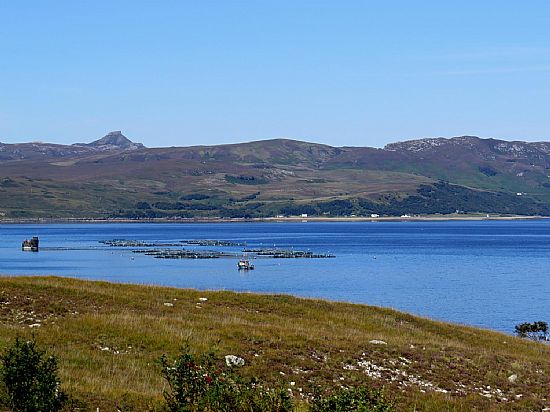 Perhaps then you too will remark, "Really? I had absolutely no idea!" and like us when we learnt the truth about fish farms, experience a radical change of mind.

Are we anti salmon farming? No. it could easily be cleaned up to benefit us all, but at present it is an unnecessarily filthy and undesirable practice.

What we ask is that the aquaculture industry should cease farming salmon in cages made from nets full of holes and keep their fishes in tanks in which excess feed, chemical therapeutants and all the fish excrement, for which they should be obliged to take responsibility (you'd think they'd volunteer), are contained and controlled. Nobody else is allowed to dump all their sewage in our seas for free, so why are the fish farmers?

Closed containment aquaculture is, as they say, a no-brainer.

DON'T JUST TAKE MY WORD FOR IT

- ALL OF THIS CAN BE VERIFIED -

HERE are some additional internet resources