“All living things have one need in common: Habitat ... persistence of habitat
is the fundamental basis of persistence of a species.” – Prof. Richard Fortey

LOCH EISHORT (pronounced Eshort) has many qualities of character, scenery, atmosphere and nature interest. The first of these that everyone notices is its wonderful landscape: more often than not shrouded in mist or rain, but if the weather is fine this mountain fringed sea picture becomes wide and peaceful, simply gorgeous. When the sun shines the blues make it breathtaking.

If you stand still and stop talking the quiet is delicious. Occasionally, the peace might be interrupted by a passing ship, helicopter or RAF jet fighter, but mostly you will hear no vehicle sounds other than the distant purr of a creeler's small boat, quad bike or car. The dominant noises are the wind in the grass, the calls of gulls and oyster catchers (occasionally, if you're lucky, a great northern diver - the fabled loon), the sudden fft! of diving gannets and the constant lapping of waves. This is one of very few places you don't have to filter out of your awareness the constant background hum of traffic. Sometimes, when you stop to listen on a still day, you hear absolutely nothing. Meanwhile, it's your mind that is ravished, via the eyes.

The picture above was taken on such a day (10/09/2014) from the low limestone cliffs above the 'coral' islands a short distance from Ord, where at low tide, the shallow waters lie tourquoise over fine white gravel made not from coral but fragments of the calcareous skeletons of a purple-red seaweed known as maerl (Phymatolithon calcareum). Dark patches in the shallows are beds of sea grass (Zostera marina), another relatively rare submarine flowering plant that flourishes only where nutrient levels are low, in the cleanest of waters. If nutrients increase (e.g. the eutrophication effect of fish farm effluent), the sea grass retreats until locally extinct. Maerl beds, such as abound in the south Skye lochs (where they've not been demolished by dredgers), are rare, home to an astonishing diversity of animals, plants and microbes that live in the labyrinthine micro-cavities a maerl bed provides. Like the sea grass, it is also sensitive to increased nutrients in the water. We know less about the sensitivity of the many other priority habitats and common and unusual species that live in this place.

On the horizon we can see the distant Black Cuillin ridge and in front of that (left), the Strathaird peninsula - with its narrow, winding road to Glasnakille (Glasnakeel), Drinan and the ever popular, fabulous viewpoint at Elgol. The high rocky summit to the right is the precipitous, deeply fissured massif of Bla Bheinn (Blaven), partly obscured by the wild cliff of Suisnish (Sooshnish) where Golden and White-tailed Eagles soar and Red-throated, Back-throated and Great Northern Divers dive. This October scene includes that very diver, heard, seen and photographed, and this March one, me at Tokavaig having some fun with friends in a glorious place, on a beautiful day, after a stimulating session of low tide biologising on my 65th. 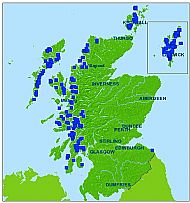 Residents and visitors agree that Loch Eishort is one of the most special places on the Isle of Skye. Can you spot any sign of industry, agriculture or forestry? Unless you know where to look, all you will see in the entire panorama is rural Scotland with not any hint of sitka spruce. This place is - as the brochures like to put it - pristine, inasmuch as anywhere in the modern world deserves that adjective.

Please look again at Loch Eishort in the photo above. Would you allow the installation of (the insertion of a few choice expletives here might indicate my opinion) fish farms here? We must not get emotional about this or let it provoke a knee-jerk reaction, but should ensure that we provide the Highland Council's planning officers with concise, well-measured and appropriate reasons why we think they should refuse planning applications for salmon farms in Loch Eishort. If the case against is presented persuasively, addressing the issues most relevant to the planning process, the planners will listen, even to the public.