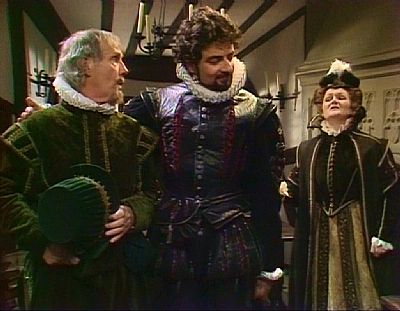 Mrs. Pants (house buyer): But what about the privies?

Blackadder: Um, well, what we are talking about in privy terms is the latest in front wall fresh air orifices combined with a wide capacity gutter installation below.

Mrs. Pants: You mean you crap out the window?

Mrs. Pants: Well in that case we'll definitely take it.

The Blackadder scene is good fun and a fitting illustration here, but I’m not sure anybody ever routinely crapped straight out of the window, even in those days. It is unthinkable even that we should (as people surely used to do) casually tip wet waste – ugh, not the contents of a chamber pot, please? – out of an upstairs window into the street accompanied by the obliging if sometimes badly timed warning: “Gardyloo!”

It used to happen, but not any more.

► A thousand tonnes of horse dung dumped daily in the streets of Victorian London is a thing of the past, pretty well forgotten. It used to happen, but not any more.

► How do you feel when, with its owner’s blessing, a dog leaves its calling card on the pavement? No! But it still happens. Pet owners are expected to scoop up and dispose of their dogs’ dirt in the bin provided or take it home – preferably not decorate the bushes with bags of muck or snag them along a barbed-wire fence.

► When disgusted seaside bathers complain about turds bobbing in the water (it really happened to me once, at Bridlington – Yeeugh!), swimming is instantly forbidden and the polluter called to account. It used to happen (and does still).

► In what we call ‘the civilised world’, human excrement is treated in high-tech sewage farms or septic tanks to make it sweet and safe, ready for decent disposal. It used not to happen, but nowadays we clean up our mess.

► Yet there remains one exception to modern, reasonable, civilised rules about filth disposal. Net-cage fish farms dump all of their fish excrement, from as many as a million salmon per farm, entirely untreated, straight into the sea, twenty-four/seven.

Allow me to emphasise that:

► A major industry – salmon fish farming – is allowed to dispose of all of its raw sewage, directly into the sea, in spite of predictable environmental detriment and at no cost whatsoever to the polluter. Isn’t that preposterous?

We look forward to the day when we can say: “It used to happen, but not any more.”

Scottish farmed salmon are kept in nets, which consist of holes through which all waste passes, from the cages straight into the marine environment: faeces, excess feed and leftover therapeutic pesticides. Whatever the quantity, that constitutes pollution, but is it significant? Judge for yourself ...

1. A modern salmon farm deposits 800-900 tonnes per year of raw fish sewage straight into the sea (figures from Hjaltland Seafarms Ltd. in their Modelling Reports, such as the one listed here on p. 9 Total Annual Release of Solids).

2. In the year 2000 (since when salmon farming has been expanding) Scotland’s salmon farms dumped at sea more raw sewage than was defecated by Scotland’s entire human population.

3. One of the main feed additives, Emamectin Benzoate (administered in feed as SLICE®), is toxic to almost everything living (it’s on the label of the agricultural formulation Proclaim®) and takes a long time to become safe. If you keep hens or cattle you will know, from your routine use of the vermicide Ivermectin, just how nasty are chemicals in the Avermectin family. Emamectin is absorbed via a fish's digestive system and migrates into its flesh so that it can be ingested by sea lice feeding on their victim's surface mucus, skin and muscle. Emamectin is carried out of the farm, into the marine environment, with the faeces and uneaten feed pellets (as well as, quite probably – have you ever wondered? – in the fish meat).

IS THAT TRUE? - find out for yourself by following up various appropriate search terms on the internet

4. Treatments frequently fail to control sea lice, which multiply, relocate back into the sea where they attack wild sea trout and salmon populations exterminating them.

Industry representatives may deny them, but these are no idle, unsubstantiated assertions.* Scientific research has shown them to be true. These facts are reality, not the witless ravings of some inane, hysterical, slogan chanting ‘environmentalists'.