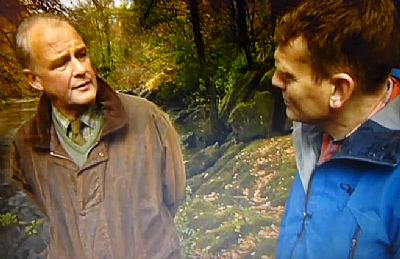 The BBC's Countryfile presenter Tom Heap interviewed Andrew Graham-Stewart, whose responsibilities are wild Salmon and Trout, and then spoke to Scott Landsburgh, the main fish farms spokesman in Scotland.[1]

Tom Heap (to camera): “In Scotland alone [fish-farming is] worth five hundred and thirty-seven million pounds and employs over two thousand people, but despite its growth and its economic success, it still is highly controversial. Upstream in Glen Coe I’m starting to find out why.”

TH: “Andrew Graham-Stewart from the Salmon and Trout Association of Scotland fears for the future of wild fish as a result of fish-farming. So what is causing this collapse?”

AG-S: “The problem is sea lice, sea lice from the fish-farms. They’re a small parasite and they live [on] and eat the flesh of salmonids; salmon and sea trout.”

TH: “But sea lice do occur naturally in the ocean, don’t they?”

AG-S: “They do. There’s a natural background level of sea lice in the sea, but fish-farms ... when you’ve got half a million fish or so in the fish-farms ... there’s a reservoir of breeding adults which create billions, literally billions of sea lice larvae, which spread out into the sea lochs and you’ve then got what is called a sea lice soup through which the juvenile fish, which aren’t adapted to coping with those numbers of lice, have got to swim. The latest credible study, which was done by sea lice experts from Scotland, Canada and Norway, concluded that thirty-four percent of salmon leaving these rivers next to fish-farms die as a result.”

TH (to camera): “Andrew says that fish-farms and the lice they generate push down the numbers of salmon in rivers like this on the west coast of Scotland to an all-time low and he also says the industry is not acknowledging its part in creating this problem. So, what does the Scottish Salmon Producers’ Organisation [SSPO] have to say about that?” 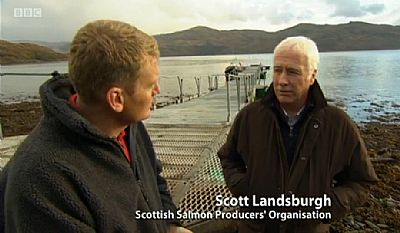 Scott Landsburgh: “No. I wouldn’t say so. I mean, there’s a lot of discussion about it but ... um ... there’s no empirical evidence that suggests that that’s the case.”

TH: “Why, then, does the industry spend millions of pounds each year on chemicals to treat lice?”

TH: “... so are you taking at least some responsibility for making sure that you reduce the lice burden out there?”

TH (to camera): “Concerns have been raised about the environmental impacts of these anti-lice chemicals. In a recent three-year study of the main fish-farming areas in Scotland more than nine percent of the sea bed samples exceeded environmental standards. The SSPO says it’s working to reduce chemicals in salmon farms.”

The spokesman for wild fishes Andrew Graham-Stewart claims they are harmed by fish farming and, in stark contrast, the spokesman for the fish farms Scott Landsburgh denies it. To my mind, the reply “No” (about which Scott Landsburgh was quite emphatic) is as unequivocal as a denial can get. But who is right? Is somebody not telling the truth? When the answer is a straight yes or no there can be no ifs or buts.

What does science have to say on the matter? Here’s what Marine Scotland Science (Scottish Government advisors) wrote in their official comment in the consultation regarding a fish farm planning application in June 2014:[4]

[1] BBC1, 1 December 2013. Can be seen at https://www.youtube.com/watch?v=fIohur9v_sU (from 1:17 to 4:13).
[2] As far as I can tell, this last sentence contributes nothing to the discussion, and moreover, it’s utterly meaningless; sheer obfuscation. Also: weasel word alert. Beware of the implicit meaning of 'sustainable' in this context, which surely refers to sustainable promotion of the industry not sustainable exploitation of the environment.
[3] ... where the sea louse infestation gets massively concentrated on the captive fishes and then re-infests the wild fish community in much greater numbers than under natural conditions.
[4] http://wam.highland.gov.uk/wam/applicationDetails.do?activeTab=documents&keyVal=N3VEIBIH09K00